BECHEROVKA REVEALS PART OF THE SECRET – THE LIMITED EDITION SPRING 2019

The Czech Republic may hold the reputation of being a beer lover’s paradise, but the country’s contribution to spirits, Becherovka, stands among the most complex liqueurs in the world. While European countries have a long tradition of digestifs, from Italian amaro to French cognac to Germany’s Underberg, only Becherovka has become intertwined with a nation’s identity, its endurance a source of national pride.

Without any doubt Becherovka belongs to Czech national heritage. First time has been created in picturesque Czech spa town of Karlovy Vary (Carlsbad) at 1807 and shortly became popular worldwide.

The recipe for Becherovka is closely guarded, with only two people knowing its exact contents and allowed to enter the Drogikamr, where the herbs and spices are mixed once a week. Becherovka gets its complexity and herbaceousness from “about” twenty herbs – the exact number being a mystery – sourced from as near as fields around the town and as far away as Asia and Africa, mixed with alcohol and macerated for a week. Pristine soft water from a reservoir ten kilometers away is then added along with sugar and alcohol. The end result is all-natural, with no preservatives or artificial colors.

Today, you can visit Karlovy Vary to take a tour of the Jan Becher house and witness the history of this amazing spirit. You’ll tour the cellars where the spirit was produced, view a film, taste the products, and more. The museum is open daily from 9am – 5pm and they offer tours in English. Call or email ahead for a reservation. Visit of Karlovy Vary is a part of our day trip from Prague.

This spring, after a long time, Becherovka will again make an exception and will launch a limited collector’s edition on the market.
On their labels they reveal four of the more than 20 herbs and spices of the secret formula.

Labels work with cartoon themes and Latin names for each ingredient. After the bottle is frozen, the Czech name and country of origin of the ingredient will also appear. Achillea Millefolium, Eugenia Caryophyllus, Cinnamomum Aromaticum and Hyssopus Officinalis appear on them. 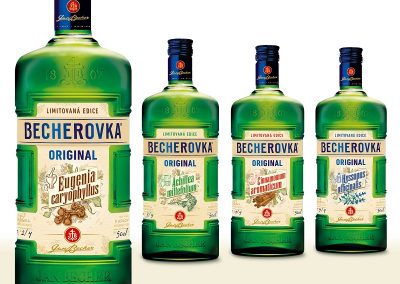 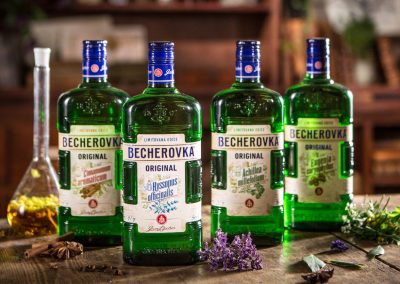